Ranch life was tough, and because Q Ranch was so remote, it had its own cemetery. By the last half of the 20th century, it had become overrun with vegetation, especially a thick and prickly covering of native roses. An inquiry from descendants of folks allegedly interred at the Q Ranch cemetery — triggered by a deathbed request from one of Jesse Ellison's granddaughters — prompted some research into who might actually be buried there. Old family records included a map of who was buried there, and a family scrapbook disgorged an ancient photo, showing the graveyard surrounded by a low stone wall, a picket fence and a hitching post.

In 2008, the Arizona Archaeological Society decided to do a complete restoration. They began by clearing the vegetation. Then they brought in machinery to scrape the surface, an inch at a time, until they found evidence of graves. Using ultrasound, they determined the exact location and orientation of each grave. Rocks were then mounded over each grave to mimic the way the graves once looked.

One actual headstone was recovered, engraved "Sam Houston Kyle." Q Ranch owner Jonathan Rogers had found it years ago, used as a cornerstone of the original Q Ranch bunkhouse. It is believed that the remaining original grave markers were probably made of wood, and thus not likely to survive.

In the course of their work, the Arizona Archaeological Society discovered that stones from the Q Ranch Pueblo had been used to make a low wall surrounding the graves. Surviving descendants contributed a marble bench and a single granite headstone, identifying the nine occupants of the cemetery and the cause of death of each. A time capsule was concealed in the fence. It seems odd today to see that people might meet their demise by being "shot by the cook" or "killed in a horse wreck."

A tenth grave exists, with no body in it. Research showed that a grave had been dug for a man whose corpse was being dragged up from Globe on a litter. It was August, and it was hot. The body decayed so rapidly that it had to be buried along the way, never completing its journey to Q Ranch.

The cemetery had a hitchin' post for visitors paying their respects to tie their horses, so if you visit today on horseback, please feel free to use it. 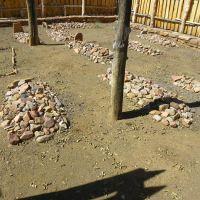 Opposite side of granite slab, showing cause of death

Marker at the entrance to the restored cemetery