The Pleasant Valley War was the longest and bloodiest range war in American History. Also known as the Graham-Tewskbury Feud, it was as bloodthirsty as it was gruesome. Yet even now, more than a century later, the truth behind the events — and even some of the events themselves — remains shrouded in secrecy.

One of the first gun battles of that war took place two miles south of Q Ranch, at the Middleton Ranch. On Aug. 9, 1887 a faction of the Tewksburys was visiting the Middleton cabin when the Grahams rode up asking for food. The Tewksburys' response was "This is not a boarding house" … and the shooting began. Hamp Blevins and John Payne were killed in this incident. A day later, Al Rose, a compatriot of then Q Ranch owner Jesse Ellison, burned down the cabin. All that's left today is a stone fireplace, the log remains of two outbuildings and a memorial to Blevins and Payne.

The nation at large was so shocked and revolted by what went on — lynchings, killing children, bodies disemboweled, corpses left for wild pigs to feed on, and more — that it delayed the granting of statehood to the Arizona territory for more than two decades.

There are those who say the war was about sheep versus cattle, but it was also about horse rustling, about cattle rustling and about empire building. In the town of Young, in the heart of Pleasant Valley, there are still living descendants of some of the participants of that feud, and plenty of folks who take clear sides.

An 1880 log cabin with gunports, allegedly built by John Tewksbury Sr., was located on the site of the Flying V Ranch — the westernmost extremity of Q Ranch. The structure was donated in 1988 by Q Ranch owner Jefferson "Jack" Rogers to the Pioneer Living History Museum in Phoenix.

Films about the Pleasant Valley War*

Books about the Pleasant Valley War *

Don Dedera
A Little War of Our Own: The Pleasant Valley Feud Revisited, 1988

Oz Flake
Some Reminiscences of the Pleasant Valley War and Causes That Led up to It, 1939

Daniel Justin Herman
Hell on the Range: A Story of Honor, Conscience and the American West, 2013

* Inclusion in either list does not connote historical accuracy Grave marker for the first victim of the Pleasant Valley War Sign at the entrance of the museum in Young Present-day remains of an outbuilding at the Middleton Ranch 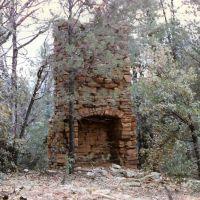 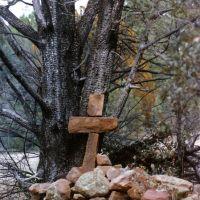 Grave marker near the site of the Middleton cabin Memorial to the men killed in the Middleton shootout Sign at the Tewksbury cabin at the Pioneer Living History Museum Later cabin built by the Tewksburys The Young cemetery, where many casualties of the Pleasant Valley War were laid to rest