The Pueblo is composed of two main pueblo room blocks divided by what is now a deeply entrenched, major drainage. Both pueblo room blocks are surrounded on either side by a large expanse of mountain meadow, similar in general configuration and layout to that found at Grasshopper Pueblo. Indeed, Q Ranch Pueblo has numerous architectural and artifactual characteristics similar to those associated with Grasshopper Pueblo. The pueblos at Q Ranch have beautifully constructed, banded masonry walls with living and storage rooms surrounding large interior courtyards or plazas. Overall, the pueblo complex covers about four acres.

Pueblo I (the larger of the two pueblo units) has approximately 90 ground-floor rooms, with 43 being two stories in height and up to six rooms being three stories tall. The smaller Pueblo II has approximately 65 ground-floor rooms, 25 of which were probably two stories tall. Additionally, there appear to be several outlier rooms. Thus, the total site complex appears to have once had over 260 rooms.

Scientific excavation has exposed evidence of a rich ceremonial life, along with cooking (both wild foods such as amaranth and domesticated crops like corn and beans), grinding, storage, trading, hunting, and ceramic production activities. Thousands of different ceramics, body ornaments and stone tools — many of which were recovered intact — have been cataloged. Room size, room numbers, and the number of artifacts found suggest that, at its height of occupation, Q Ranch Pueblo had from 800 to 1,000 people living there, along with other persons living away from the pueblo at other sites situated within the area. Thus, there was a far larger population living in this region prehistorically than there is today.

Absolute dating results (radiocarbon and archaeomagnetic), along with ceramic analysis, suggests site construction began at approximately A.D. 1270 and that site abandonment occurred around A.D. 1385-1390. Both pueblos are theorized to have been abandoned when a large forest fire burned the structures down, as there is no evidence of warfare. The residents appeared to have escaped the fire but did not rebuild either of the pueblos. It is believed the prehistoric residents of Q Ranch moved to Grasshopper Pueblo and lived there until that site was abandoned.

Artifactual material, especially the abundance of White Mountain redware ceramics, suggests a central mountain (i.e., Mogollon/Prehistoric Western Pueblo) cultural tradition. Unlike earlier anticipation, Q Ranch does not appear to be a Salado "pueblo." Tens of thousands of sherds, chipped stone flakes, stone axes, projectile points, shell jewelry, manos and metates have been collected and analyzed. Eventually there will be a book about the archaeology and excavation results at Q Ranch Pueblo, along with two National Register nominations for the site. 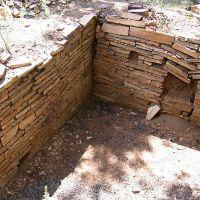 Restoration under way in Pueblo 1 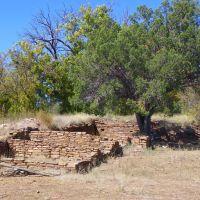 Rooms with three types of fire pits for travelers to cook