Ranching around the Q Ranch

Ranching at Q Ranch began about 130 years ago. In the early 1880s, Henry Middleton, one of the first settlers in the area, started a dairy farm south of what is now Q Ranch.

In 1882, George Newton began building cabins and raising cattle at what would soon become Q Ranch. When Newton was killed crossing the Salt River in 1892, his wife Alice sold the property to a man named Jesse Ellison. Ellison's wife's cattle brand — the letter Q — gave the ranch its name.

Claiming to be a Confederate Colonel, Jesse Ellison came to Arizona by rail from Shakelford, Texas, with his wife, Susan, six daughters, two sons, 38 other settlers, and 3,000 head of cattle. He unloaded the cattle at Bowie, Arizona and drove them north to Globe, causing a stampede through the town. Before purchasing Q Ranch, Ellison settled east of Payson, at what was called the Apple Farm. In 1895, at the urging of a local rancher named Ramer, Ellison bought the Newton property and named it Q Ranch. Buildings from that time still exist.

Ellison was a controversial and ruthless character whose behind-the-scenes role in the Pleasant Valley War may never be fully understood but seems to get more unsavory over time. Ellison called his daughter Duett his "right-hand man." She could act the part of a lady when need be, but she could also ride, rope and shoot.

Duett planted a fruit orchard at the ranch, of which apple, persimmon and almond trees remain today, along with towering elderberry shrubs whose fruit provides food for birds, and wine, pies and jelly for humans. In fact, the official beverage of Q Ranch is the Duetta, a cocktail of vodka, elderberry syrup and lime juice. Perfect at the end of a warm summer's day.

In 1904, after a 14-year courtship, Duett married George W.P. Hunt, who became Arizona's first governor when the territory was granted statehood. Hunt, Duett, Jesse Ellison, Susan Ellison and Lena, another of Jesse's daughters, are entombed in the white pyramid in Papago Park adjacent to the Phoenix Zoo

In 1915, Jesse Ellison sold Q Ranch to Pecos Mcfadden owner of the nearby Flying V Ranch. McFadden combined the two ranches into one unit encompassing 100 square miles. In 1929, McFadden sold the ranch to Q Land and Cattle Company under the direction of George Wilson. Wilson was a boy when the shootout between the Grahams and Tewksburys occurred at the Middleton Cabin. The ranch again changed hands in 1948, when Robert Wilson, George's son, sold the ranch to Otto and Rue Marshall, who in turn sold the ranch to Watson Fritz in 1950.

In 1956 Q Ranch was purchased by Jefferson "Jack" Rogers, who ran the cattle operation until he retired in 1988. The Q Ranch property now belongs to Jack's son, Jonathan. Jack Rogers Butchering a Cow, Circa 1963 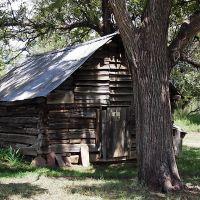 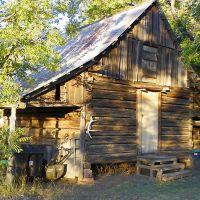 Interior of Blacksmith Shop with Brands Burned into the Walls